Home » Archive » How to Make Virtual Reality Safe for Kids? 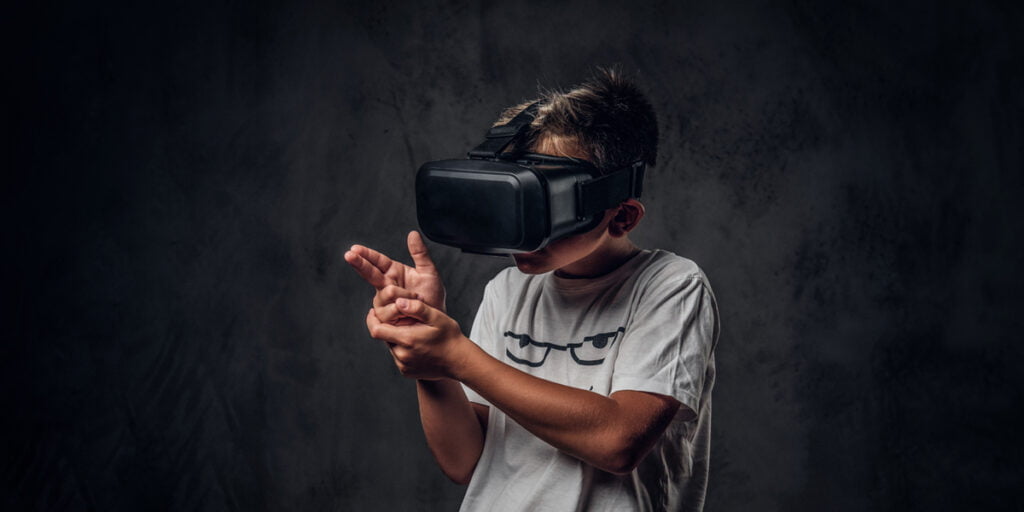 How to Make Virtual Reality Safe for Kids?

How to Make Virtual Reality Safe for Kids?

Virtual reality is a growing field of technology and it’s practically on steroids. In fact, you’ve most probably heard of it, seen a VR headset, or have one at home. If you have children, the question “is virtual reality safe for kids,” might worry you sick. The good news is that this exciting technology has a lot of uses. The bad news is that your worries are founded on scientific studies. So, let’s try to answer this burning question, “is virtual reality safe for kids?”

What Is Virtual Reality?

Imagine you’re in a forest. The birds are chirping, and you can hear the flow of a river coming from behind the trees of the dense forest. As you make your way through the forest, you hear your phone’s ringtone. It’s time to go back to reality, so you take off your VR headset and exit your virtual reality to enter, for the lack of a better word, real reality.

Virtual reality tries to capture real experiences and simulate them, hence the name virtual reality. Today the primary way to accomplish this is through VR headsets. Virtual headsets are worn by users and show two different images to the user to create the illusion of depth. The images either come from a computer, gaming console, or phone that is connected to the headset.

But VR technology isn’t just something being developed for fun and influencing society as a side-effect. Rather, its applications are numerous and many fields have shown that the technology has promising capacities for the future. Here are a few examples of VR applications.

Gaming might be the most prominent application of virtual reality technology. The most sophisticated VR headsets are ones made for gaming. The gaming industry has made strides in developing games made specifically for VR. Newzoo’s VR Game Revenue study projects that VR game revenues will increase over sixfold in the near future.

Education is a broad term yet it seems virtual reality is popping up everywhere and anywhere related even remotely to education. Those who want to become pilots and surgeons can practice in a safe environment using VR which wasn’t previously possible. VR is also used for education in the military, mining industry, and other fields where the scenarios can easily become life-or-death ones.

But not all VR education is so specific. Today, many museums use VR to give you a tour of their collection without visiting the real place. The Louvre’s Mona Lisa VR experience for example has attracted many art lovers.

The effects of virtual reality in curing illnesses are still being explored but there are a lot of optimistic studies being published every day. For example, virtual reality exposure therapy can help PTSD patients in the near future. Other studies have shown virtual reality’s impact on persons with dementia to be positive.

Virtual reality may yield promising results in various scientific and artistic fields, but using a VR headset has its own effects on individuals. We’ll focus on the positive and negative effects that virtual reality has on children and adolescents, not adults. Contrary to the belief of most parents, VR headsets aren’t all about games. Though your child might want you to buy one so they can play games, you can use this to your advantage. The VR headset can help your child’s education without them being aware.

The most important positive aspect of VR is its educational capacity. Using VR headsets has already become a part of the e-learning education process in some classrooms around the world to do so for several reasons, such as:

Unfortunately, using this wonderful technology has many disadvantages, especially for smaller children. At the time of writing, all VR headsets available on the market have a minimum age requirement of 13 (one exception is 12). But there are still problems that we have to acknowledge.

First, we have to understand why the age requirement started at 13. The main suspect is the COPPA compliance that companies have to adhere to when selling products. This is the law in the U.S. but many other countries have equivalent laws. The word used above was “suspect” because honestly, nobody knows the real reason behind this industry standard. We can better understand the problem if we know what the problems of VR are for children. Here are some of the most important cons of using VR that you need to know about:

Vergence and accommodation are two separate functions that the eyes perform, which help us see clearly. Simply put, Vergence is the movement of your eyeballs while looking for something and then fixating on it. If your vergence isn’t right, you experience double vision. After you fixate on something, something in your eye focuses the light on your retina which produces a sharp image; this is called accommodation.

For both vergence and accommodation, your brain calculates the distance from the thing you’ve fixated on. Normally. These two distances usually match. But things are different when you use a VR headset. Because when you use a VR headset, two screens show slightly different images to create the illusion of depth. This is problematic because your vergence and accommodation distances don’t match.

Too Immersive Is Bad for Kids

Virtual reality’s main marketing point is how immersive it can get. The problem is that kids aren’t as adept at differentiating reality and virtual reality as adults. Having children believe in Santa Claus might be fine, but if they’re talking to Nemo, they have to understand it’s not the real world. Immersiveness can also make violent experiences such as horror games much more exciting and damaging for children simultaneously.

Moreover, an immersive experience can make it so that children trust the technology too much. The idea of being more influenced by VR is a pro in education but a con in almost every other field. It just shows that much of the damage a VR headset can cause depends on the context.

There are no parental control apps for VR headsets at the moment of writing. The only exception is the Meta Quest product line. By introducing the option to put parental controls on Oculus (Meta Quest), Meta is one step ahead of the competition. Though they actually have parental controls, they’re still far from the advanced parental control features third-party apps like Safes can provide.

Is VR Safe for Children?

Virtual reality is as broad a term as reality itself, maybe even broader. Anything is possible in the realm of VR technology and we’re still experimenting with the different methods of interaction it provides. To be on the safe side, it’s best to not let your child use a VR headset if they’re under 13. If they’re over 13, make sure to time them and enforce regular breaks, even if they’re consuming educational content. All in all, virtual reality can definitely help your child in the classroom, but not so much at home. At least, not yet.