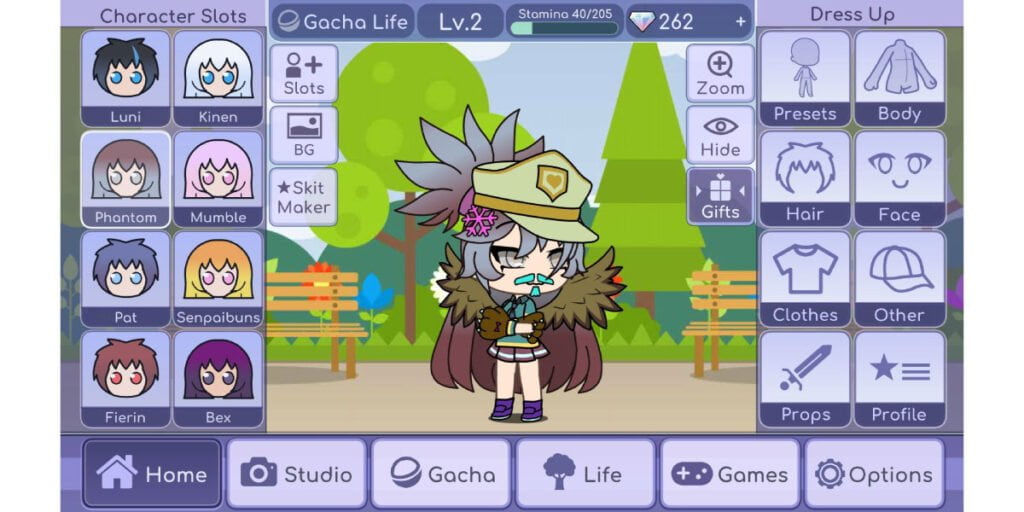 As an adult male who plays a lot of games, I didn’t think I’d one day play a game like Gacha Life. I tried to look at the game from a parental control viewpoint and not from a gaming perspective. The idea behind Gacha Life is customizing avatars and everything else including the mini-games are just roads to that goal. Gacha Life has become one of the most popular games for kids recently and it’s time parents got an answer to their questions: Is Gacha Life safe for kids?

What is Gacha Life?

Gacha Life is a mobile game available on the Google Play Store and App Store, though there’s also a demo PC version available as well. The game features eight avatars that are anime-esque in their looks. Your child can customize these characters; change their features, choose their clothes and accessories, and even choose what pose they make for a photo.

One part of the very short Gacha Life Terms & Conditions says, “…you shall not create, edit, or upload any material from Gacha Life that is defamatory, vulgar or obscene, sexually suggestive or explicit, racially, culturally, or ethnically offensive, threatening, hateful or abusive.” Keep these terms in mind because we’ll get back to them later. 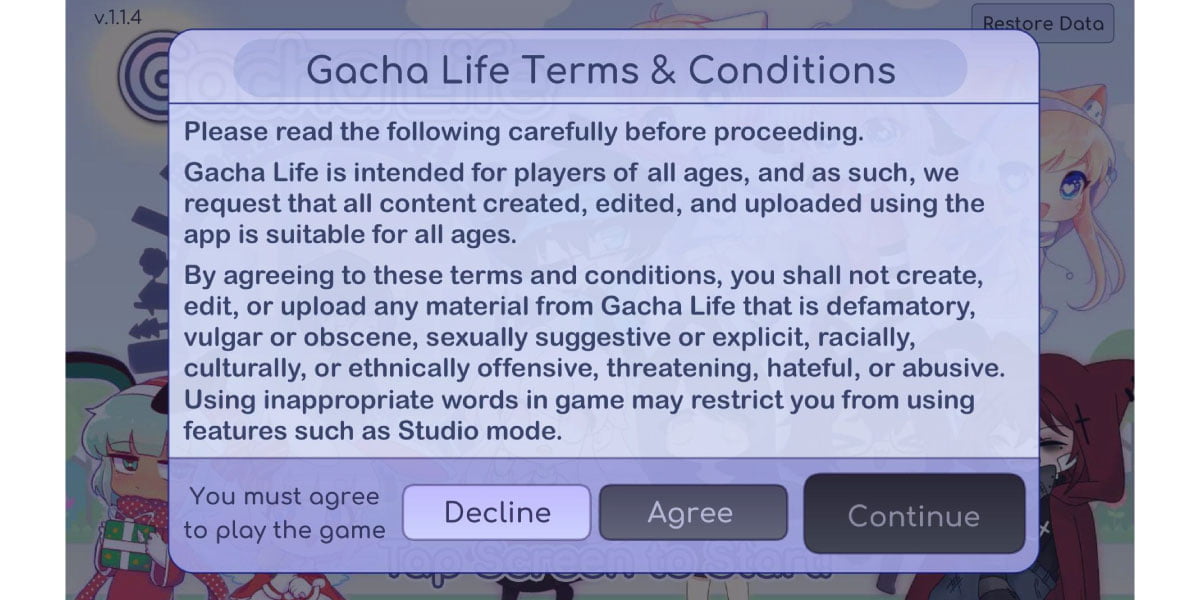 In the game, you can choose between different sections, each of which has a few activities to perform.

In the home section of Gacha Life, you can choose between the 8 different avatars you’re given. Each avatar can be customized with a generous number of presets available for each body part. There are also props and accessories that your avatars can wear. Also, kids can choose to have their avatars cross-dressed.

In the studio, you can take pictures of your avatars. You can choose any number of avatars to be in the photo. You’re able to change the background, add props, have chat bubbles appear, and even change the poses your avatars make.

In the game, you have a certain number of diamonds which you can use to buy things. This includes the ability to “Gacha” which if I understand correctly, means to obtain random gifts and recover stamina. By the way, stamina is also a resource in this game. In the Gacha part, you have to spend diamonds and take your chances. If you don’t have enough diamonds, select the “+” sign next to your number of diamonds in the corner. Congratulations! You’ve arrived at the in-app purchases part of this game. 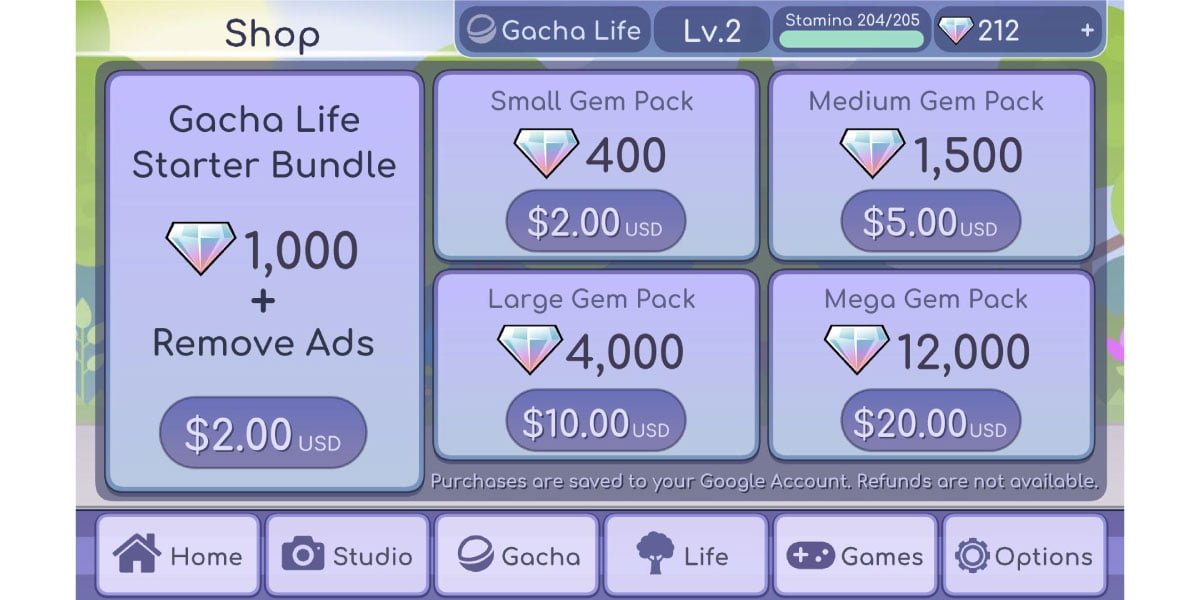 This is the story part of the game. Here, you can move with the avatar you’ve chosen at “Home” and talk to others. To talk to NPCs (non-playable characters), you have to spend stamina, the game’s currency apart from diamonds (It appears the people behind Gacha Life are all introverts). You can develop your relationship with each of these characters until your stamina runs out. That means it’s time to rest and stop mingling with the school nurse!

In the game section, you can choose to play one of the eight mini-games Gacha Life offers. The mini-games offer simple challenges and most of them are based on how high a record you can set. So, losing doesn’t mean a lot here. I’m not embarrassed to say that I became very competitive in the math mini-game, especially since I considered myself to be good at subtracting numbers. 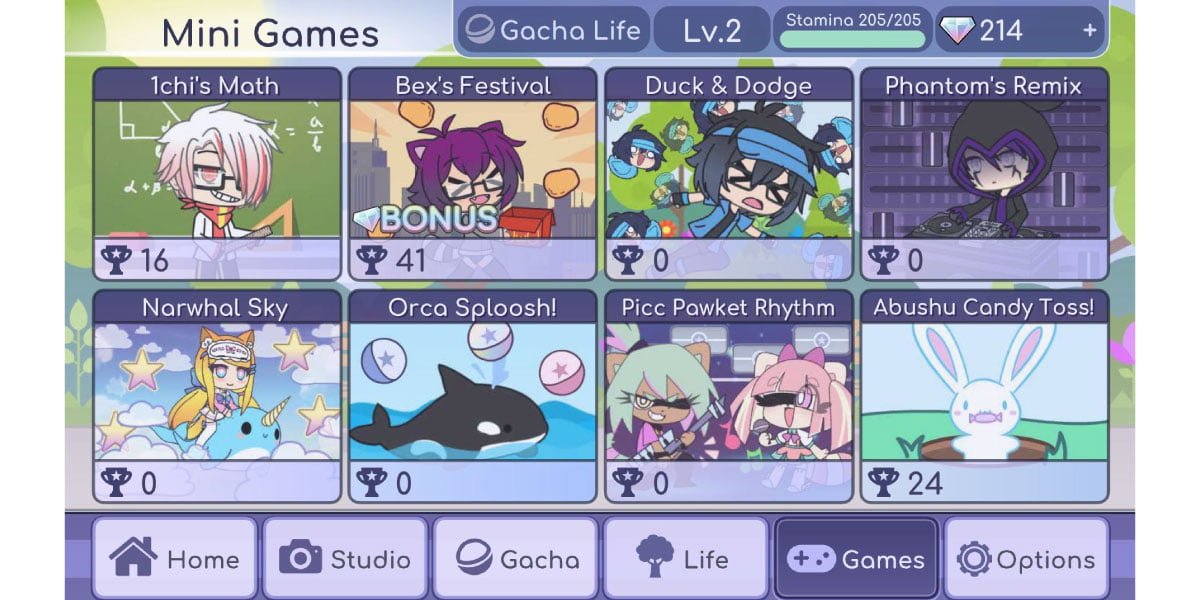 Still, I couldn’t see what the fuss was about! But then, as I was licking my wounds after a tough mini-game involving adding and subtracting, I found out about the Gacha Life community. When a game, especially a mobile game, suddenly becomes popular, it’s almost always then used by YouTubers as part of their streaming videos. Though no one can say for sure whether it’s YouTubers who popularize a game or if they jump on the bandwagon after its already gained momentum. Maybe it’s both.

The community that plays Gacha Life consists of kids, with a large majority being girls. The app is rated “For Everyone” on the Play Store, and “+7” on the App Store. But is Gacha Life appropriate for a 7-year-old?

First, you should know that there are more Gacha games other than Gacha Life. Gacha Life, Gacha Club, and Gacha Heat are just some of the Gacha games released in recent years. Each has its own gimmicks to keep things fresh, yet it still includes the idea of making your own story with your own characters. So, is Gacha Club safe for kids? In fact, are any Gacha games safe for kids?

Each of the Gacha games has its own age rating which you can check in the Play Store, App Store, or wherever else you download the game. But it’s safe to say that you wouldn’t think these games are for kids if your first impression was a YouTube video of the game. YouTubers make videos with sexual undertones, sometimes sexually explicit content using these games. All it takes is a voice-over and some editing. The Terms & Conditions I mentioned above make a lot more sense now.

Your child can play a Gacha game without visiting the YouTube videos people make of it. You simply need to use a parental control app to keep your child safe while also letting them have fun. It’s hard to stay innocent as a kid in this day and age, but applications like Safes help make things easier.

With Safes, you can set a schedule for your child and also a screen time limit so they don’t get too addicted to a Gacha game. You can also use it to block the YouTube app and its website. To check out Safes’s features for yourself, feel free to download it today.