Home » Archive » What Are the Effects of Cyberbullying on Children? 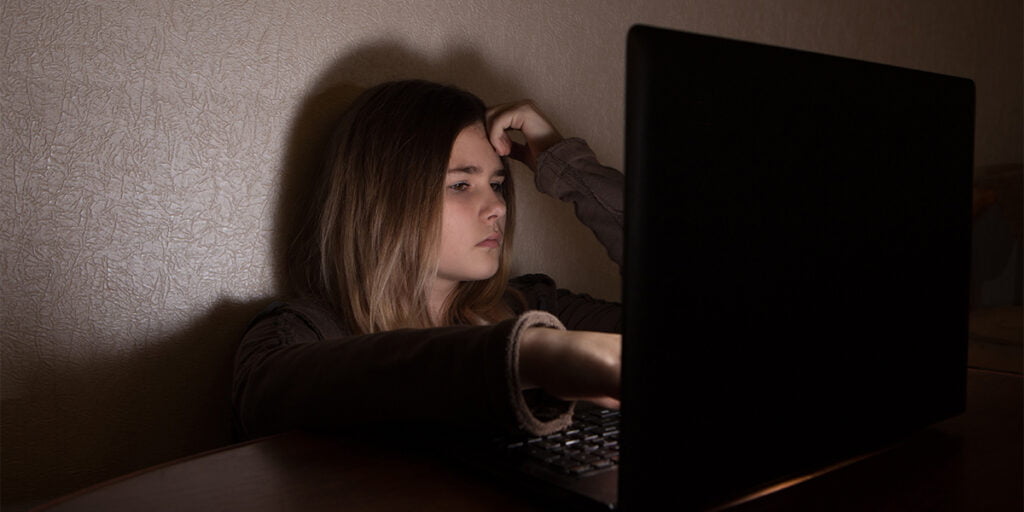 Children tend to fall victim to bullying more often than adults, perhaps because children are more sensitive to bullying and don’t know how to deal with it, and child bullies tend to get away without punishment. On the other hand, adults know how to protect themselves, and adult bullies know there will be consequences for their actions. Cyberbullying follows the same pattern. According to Pew Research Center, children are cyberbullied almost two times more than adults. Sadly, due to the embarrassment they undergo, most children don’t notify an adult about being bullied. That’s why we need to investigate ‘what are the effects of cyberbullying on children?’ to be able to help our young ones.

Cyberbullying is constant harm done using the internet and electronic devices to intimidate, defame, psychologically hurt someone, or harm someone’s physical or virtual properties. Everyone is familiar with bullying since it stems from human nature to strive for power and dominance. However, parents born before the digital revolution may not have a first-hand experience with cyberbullying. Comparing and contrasting bullying and cyberbullying can help understand what the latter is.

How is Cyberbullying Different from Bullying?

Bullying and cyberbullying are the same in essence: physically or psychologically hurt someone to gain dominance and power over them. The most significant differentiating factor of cyberbullying is it happens in the cyber world. Unlike bullying, which usually involves damaging someone’s property, hurting someone physically, and using spoken words or physical tools and mediums to harm someone, cyberbullying only replies on the cyber world and digital devices. What Are Different Types of Cyberbullying?

Cyberbullying can take non-verbal, verbal, psychological, and social forms, each with multiple subcategories, as listed below:

Although cyberbullying happens in the cyber world, like bullying in the world out there, it can inflict personal property. Sometimes bullies try to hurt the victim by hacking their accounts or damaging their devices. Cyberbullies often verbally insult, tease, or troll someone in posts, comments, messages, etc., on social media or messaging apps. At other times they use psychological tools such as intimidating, threatening, and blackmailing in forum messages or emails or by stalking on social media. Cyberbullying can also have social effects by defaming or spreading lies about someone or encouraging others to exclude the victim socially.

Where Does Cyberbullying Children Take Place?

Cyberbullying children can happen on any digital medium where social interaction takes place. It can happen on social media platforms, messaging apps, online games, forums, chatrooms, or using Emails and SMS. Below we will explain how.

Cyberbullying children is most common on social media because they are platforms where many people gather together to share content and exchange messages. Cyberbullies are known to attack children by posting lies, rumours, and derogatory pictures and videos to defame their targets. They may use posts, stories, comments, or messages to encourage others to exclude them socially.

Cyberbullies also use comments and private chats to insult, tease, or blackmail the victims. Sometimes after the victims block the bullies’ accounts, they create new accounts to get back at them. Another method cyberbullies use is creating fake accounts under the victims’ names and posting demeaning content.

Messaging apps such as WhatsApp, Telegram, and Snapchat can also be used to target children for cyberbullying because, using them, you can send private messages to users. Also, channels and groups on these platforms are hotbeds for spreading lies, defaming and teasing people. Disappearing messages on Snapchat and Telegram are infamous for enabling cyberbullies to send derogatory messages and escaping the consequences since all messages will disappear after a short time.

It may not look like it, but cyberbullying is common on online gaming platforms for children and youth. Some game platforms, such as Roblox, have in-app chats that users can use to plan strategies and discuss games. However, children sometimes abuse this feature to tease or intimidate each other.

Cyberbullying can also take place on websites with forums or chatrooms. Sometimes trollers target a topic or chatroom rather than a person to share intrusive or derogatory messages publicly. Although it is less common today, SMS and emails may also be used to cyberbully children. Cyberbullying has psychological, physical, and social effects on the victims. First and foremost, children undergo tremendous sadness, fear, and embarrassment, which can develop into mood changes, depression, and low self-esteem. They also experience a lot of stress, anxiety, and anger, which can lead to aggression and drug abuse. Victims of cyberbullying tend to experience isolation and social exclusion. The inability to form relationships worsens their pre-existing symptoms, which can lead to more destructive psychological problems such as self-harm and suicidal thoughts.

Stress, anxiety, and anger have other physical symptoms in cyberbullied children. For example, they may have gastrointestinal problems such as stomach ulcers, nausea, or sleeping disorders. Sleeping disorder combined with all the abovementioned issues leads to difficulty concentrating at school and poor academic performance.

Everything considered, cyberbullying in children should not be taken lightly since it severely affects the victims. A good source of inspiration for parents can be 13 Reasons Why, a series about a teenager who falls victim to repeated types of bullying, including cyberbullying, which results in her decision to end her life.

How to Help Cyberbullied Children

Since bullied children undergo feelings of great humiliation and fear, they tend to be reluctant to open up to adults. Therefore, you should look for signs of cyberbullying in your child’s behaviour. Change of mood, skipping classes, avoiding student gatherings, aggression, and eating and sleeping disorders are signs that can give you a heads up about your child being cyberbullied.

If you suspect your child is cyberbullied, the first thing you need to do to help them is to have an intimate talk with them. When talking to your child, you should always remind yourself that most of the time, victims of cyberbullying haven’t done anything to ‘deserve’ this much aggression from others. Therefore, you should support your child emotionally and practically. Your child has already suffered a lot of humiliation, fear, and stress, so you should do or say something that adds to their suffering.

After realising your child being cyberbullied, you shouldn’t ban them from using the internet and smart devices because they could be the only ways your child communicates with others. Instead, you should seek professional help to protect them. Psychotherapy and support groups can help your child get back to a normal life.

Moreover, gather evidence of cyberbullying to show to school authorities, parents, or the police. After that, block the abusers to stop them from further harming your child. You can also report the bullies’ accounts to the platforms your child uses to have them removed. How to Prevent Cyberbullying

The first thing you as a parent need to do to protect your child against cyberbullying is to stop your child from using social media, messaging apps, games, or other online services which are not appropriate for their age. Most social media restrict users below 13, while some messaging apps, such as Telegram, are limited to users below 16. However, since most of these services do not verify children’s age when signing up, you must ensure your child doesn’t secretly use them. To do so, you can use Safes parental control suite. Using Safes, you can block inappropriate apps and websites on your child’s phone, tablet, or computer. You can control your child’s access using your own phone.

Another solution you can use is to modify the privacy settings on your child’s accounts. Using these settings, you may limit who can contact your child and see their content. Each app has different sort of settings. In our blog’s App Review and Social Media categories, you can find numerous articles instructing how to modify privacy and parental settings on popular applications and platforms.

Finally, you should educate your child on how to protect themselves in the online world and avoid getting into trouble. For example, you can instruct them not to accept friend and message requests from strangers, share private information and content with people they don’t know well, post something that could jeopardise their character, and not respond to scams or click on phishing links. Use Safes to Protect Your Child from Cyberbullying

As explained earlier, you can use Safes parental control suite to block unsafe apps and web platforms for your child. If you wish to learn more about Safes and its array of features, check out the features and pricing plans pages on our website. If you can any questions, feel free to contact us.