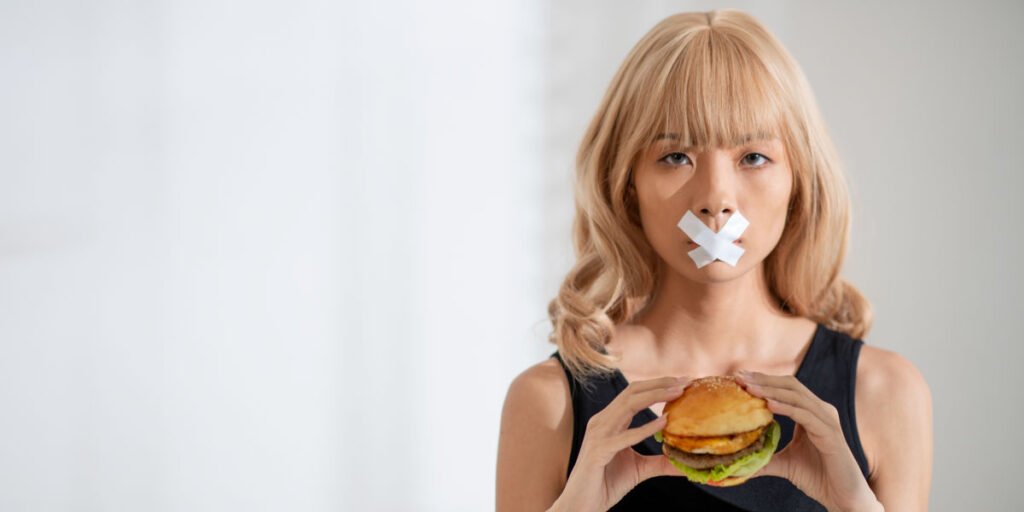 Children and adolescents are growing up in a world where they get overwhelmed with mass media every day. Statistics reveal that a child or adolescent spends an average of six to seven hours a day viewing various media. Several articles have indicated a link between how the media shows the thin female beauty ideal and the muscular male body ideal, and a variety of psychological symptoms, including body dissatisfaction and eating disorders. In this blog, we are going to delve into some social media and eating disorders statistics.

What Is an Eating Disorder? 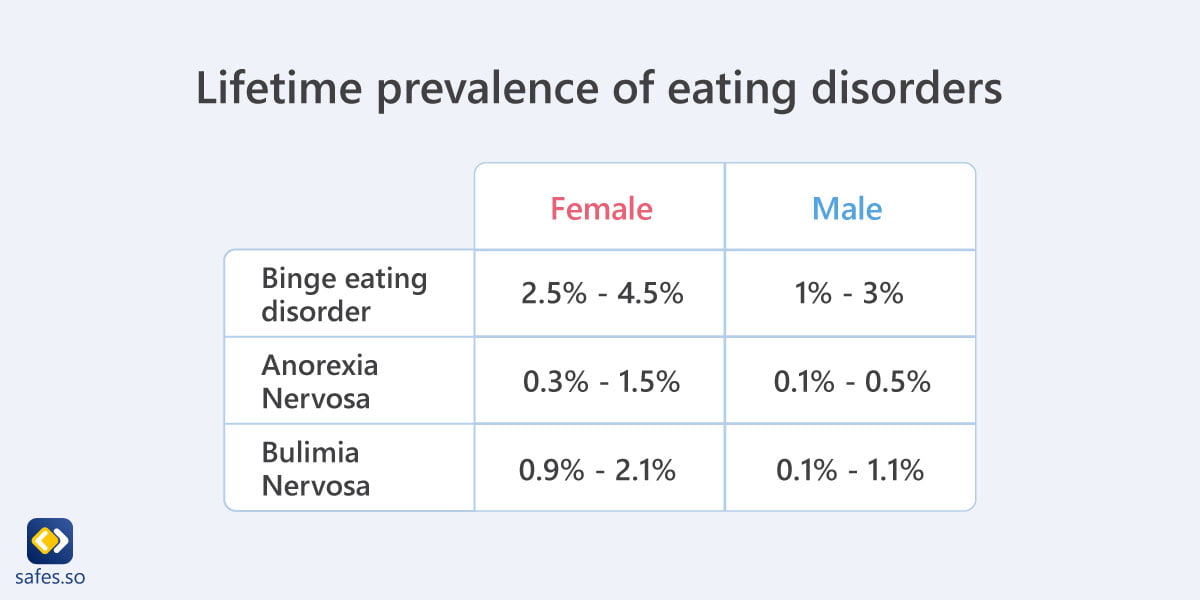 People with binge-eating disorders overeat regularly and do not try to burn extra calories. The frequency of binge-eating episodes is mostly once a week. People with this disorder are often overweight or obese.

People with anorexia nervosa dramatically limit their consumption of food due to fear of gaining weight. This can lead to severe health complications because of excessive loss of body weight. The main factor that causes anorexia is an inaccurate perception of body weight or shape. People with this disorder are often underweight.

People with bulimia nervosa episodically eat a lot of food and then try to burn the excess calories in an unhealthy way. The uncontrolled binge eating causes a feeling of guilt, which results in people forcing vomiting, heavily exercising, or using laxatives. People with this disorder often have normal body weight or are slightly overweight. 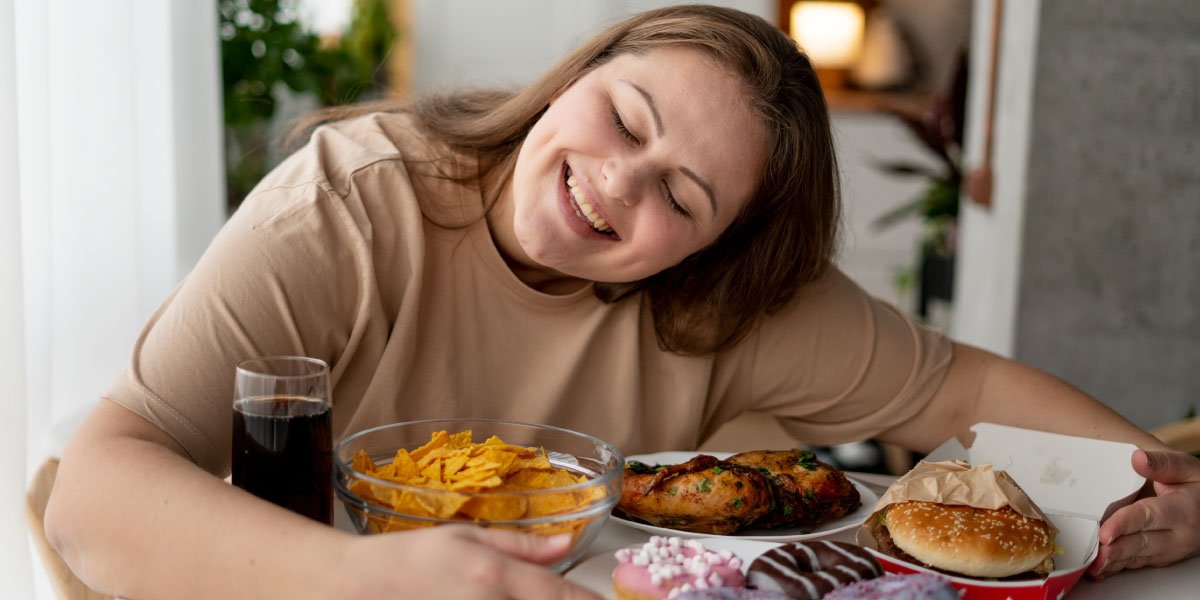 It isn’t certain what causes an eating disorder. Many experts say it might be due to a combination of environmental, biological, and psychological factors.

According to the WHO, childhood and adolescence are critical stages of life, because nearly one in two adults’ mental health issues start at 14 years old, and 75 percent are in their mid-20s. People with mental health conditions may be more likely to develop an ED. Feelings of low self-esteem and stress may also contribute to these behaviors.

The current Western ideal of body image, self-worth, and success is related to thinness and a desire to achieve this body type. This may be emphasized by pressure from the media and peers. The increase in accessibility to social media cannot go unnoticed.

According to studies, there has been a significant change in the weight and size of female and male models portrayed in western society’s media, as well as the concept of the “perfect or ideal body”. Katzmarzyk and Davis illustrated in a study that over time the cultural ideal for women’s body size and shape has become considerably thinner and leaner. Men’s body size and shape have become stronger and more muscular. They found that 70 percent of the women were underweight, and more than three out of four women’s BMI was 15 percent lower than the healthy average. 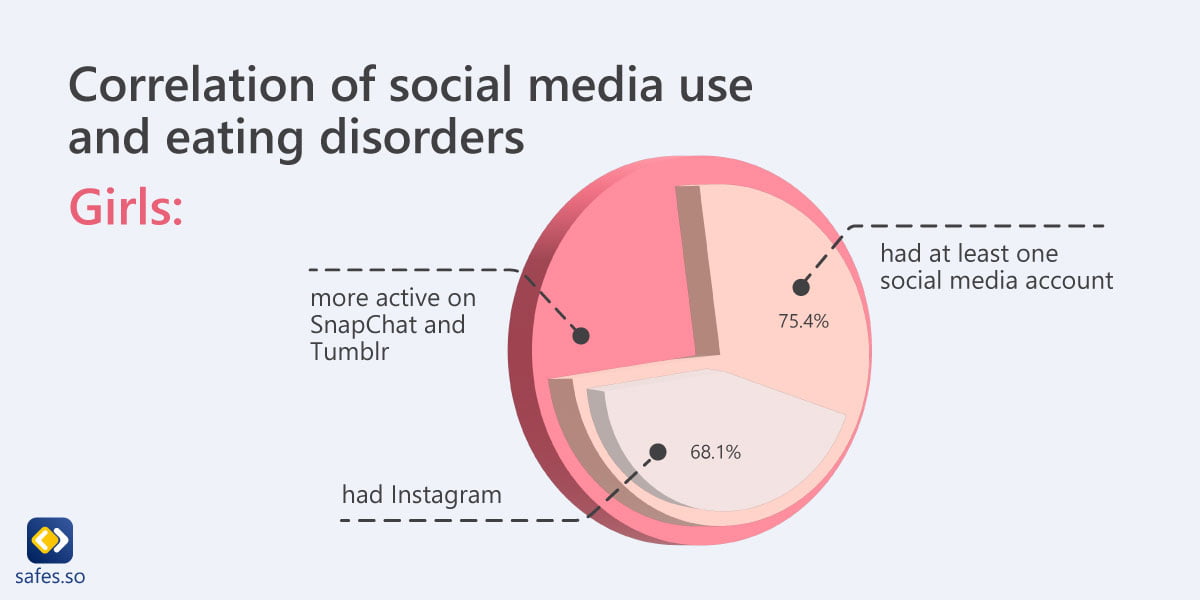 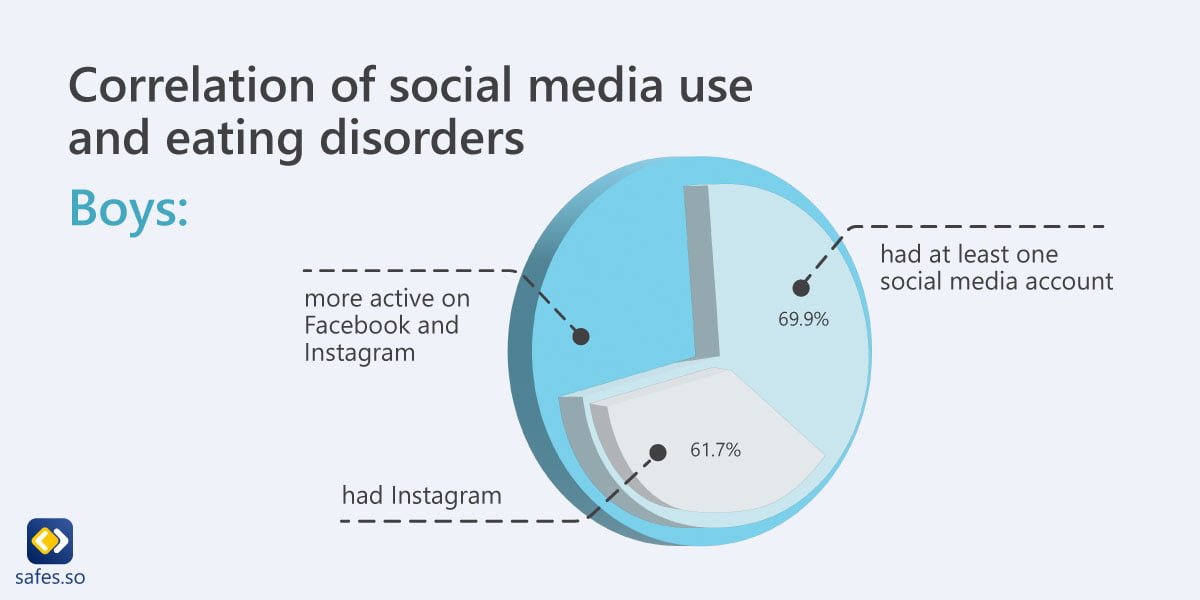 How Does Social Media Cause Eating Disorders

In this section, we go over how social media can cause eating disorders. Social media contributes to these issues in several ways, including:

Nowadays it is common for teenagers to watch a movie, a YouTube video, or scroll through Instagram while eating. This causes non-mindful eating, and can eventually result in binge eating.

The most followed people on Instagram are a collection of slim women, and muscular men. These people can project a wrong impression of the ideal body type. A lot of teenagers and children are unaware that these influencers edit a lot of their photos. They often have a skilled team to take the best picture of them and edit every little “imperfection”. In addition, they often have a team of personal trainers and health specialists watching over their health.

Lots of Foods on Display

There are a lot of food bloggers, especially on Instagram. These people make videos and photos of delicious recipes and put them on display. The more you look at this food content, the hungrier you’ll get. This can cause binge eating, and when it is paired with guilt after an episode it can result in bulimia.

One of the negative effects of social media on your child is sleep deprivation. Because of the continuous scrolling and checking of their phones, their sleep might get sacrificed. Research has shown that a lack of sleep can cause binge eating and making unhealthy food decisions.

Since the COVID-19 outbreak online personal trainers and “food experts” have become increasingly more active. A lot of these online personalities give out free generalized meal plans, your teenager can be tempted to use these. These meal plans can be presented as a weekly or monthly challenge, and the influencer has planned what foods to eat at any time of day. These plans seem to offer some sort of benefit for your child, but because they are not personalized it’s more harmful than beneficial. 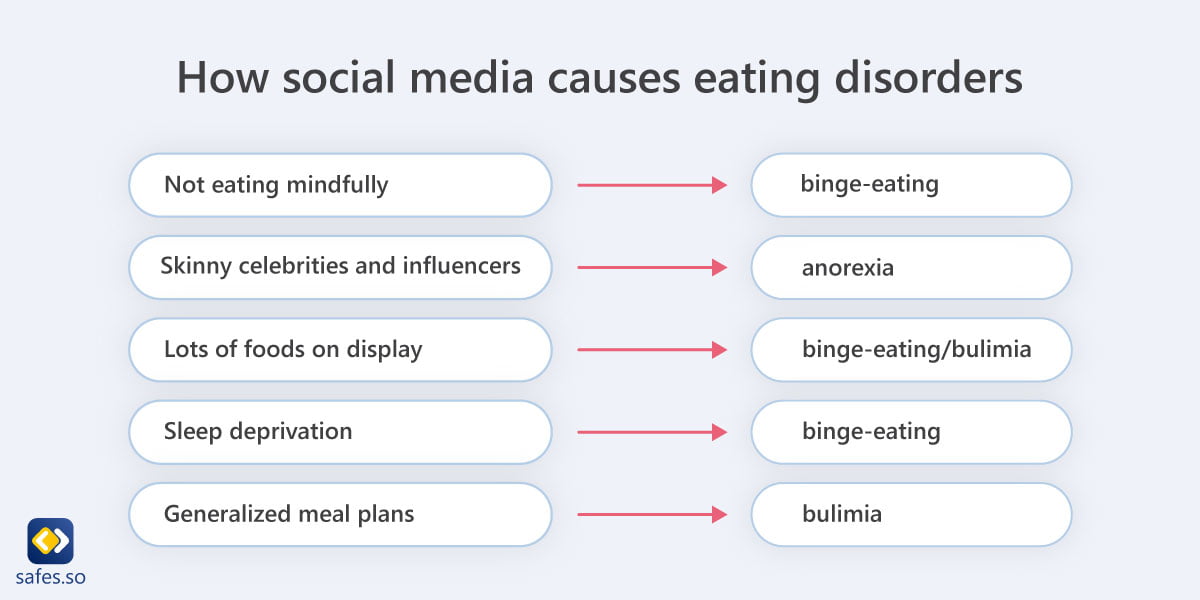 Children can create a social media account on their thirteenth birthday. When they create an account, a pop-up appears asking them to verify that they are actually 13. They can verify this even if they have not yet reached that age, there is no proper control. There are safe social media platforms for children that your child can use without you worrying about the negative effects of these platforms.

To help your child and prevent social media from causing an eating disorder, you can think about limiting social media or using therapy. Medication has shown little effectiveness in the treatment of anorexia, but some medications seem to be effective in treating bulimia.

Cognitive behavioral therapy (CBT) is a combination of behavioral modification techniques and talk therapy. CBT can address previous trauma or question the motivation behind extreme weight loss. The therapist will help your child to deal with possible triggers. For children and adolescents, it can be beneficial to get into family therapy to improve communication between the child and parents.

Few trials showed that Olanzapine may stimulate appetite and encourage eating in people with anorexia. People with bulimia can be treated with selective serotonin reuptake inhibitors (SSRIs) to help treat underlying mental health disorders and reduce bingeing-purging cycles. Other antidepressants like monoamine oxidase inhibitors and tricyclic antidepressants have been shown to reduce bingeing-purging cycles as well.

Download Safes to try out all the features to protect your child.